We don’t know why, or how, but they’re drawn to certain girls. The monsters, that is.

The most common theory is that these girls also have an uncanny ability to attract their peers with the worst survival instincts. The ones who trip over cracks in the sidewalk, who always drop their keys, who walk towards the bump in the night with dead phones in their pockets.

To solve the continuous strings of blood-soaked nightmares, they built a new school. They transferred the girls there, before anyone else could get hurt. They can take care of themselves, after all. They’re strong, fast, tough. They don’t need friends. Well, maybe they do. But it’s for the best if they don’t have any.

We sent the girls to the middle of nowhere, and the monsters followed.

Better them than us, we say.

In Final Girl Academy, you and your friends play as the students and faculty of Carver Academy, named after Ms. Jacklan Carver, the (now-missing) founder of the school. On top of the complicated nature of day-to-day life at an isolated boarding school in the middle of nowhere, you’ll also have to fend off monsters with murderous intent.

To play, you’ll need at least three six-sided dice (d6) and a group of 4 to 7 people, with one taking on the role of Headmaster and facilitating gameplay.

This game was designed with inspiration from the Lasers and Feelings system, developed by John Harper, and takes inspiration from films like Halloween, The Faculty, Raw, The Craft, and Scream.

In order to download this tabletop horror game you must purchase it at or above the minimum price of $1 USD. You will get access to the following files: 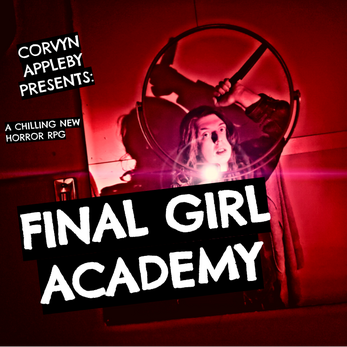